Question – What did you do today on your PC that you could not have done with a Tablet or SmartPhone?

If you use your PC for any of the following:

Then you almost definitely did not need to use a PC to do the things you did.

As we can see from this illustration, when a tablet device was bought by netbook/laptop owners, a total change in behaviour was observed, with people favouring the tablet for CONSUMING but still opting for their notebook for CREATING.

For now we can see this kind of statistic to be a key indicator of the challenges SmartPhones and Tablets face.

They need to be more useful to workers and power users, designers, editors, etc to ever replace the desktop for actual hardcore work!

With apps ranging from word-processing, social networking, emailing, retailers, and internet speeds that are useful on the go never mind through WIFI connections, people really must be starting to wonder if the PC is actually needed.

The real challenge is screen real estate and power: Both issues are solvable.

The only gripe we would say for SmartPhones is the size of the screen, but if new technology such as Graphene takes on in the next few years, even your tiny wee SmartPhone could have a huge screen when needed.

But before the above happening, we can see that a digital interface (output and cable) would be all that was needed to blast your smart phone onto a large screen for most work that required a larger area.

And if this was not good enough for the design lead community (got to get the gamma right man) then we are sure the interface could marry up with macs own monitors as most designers are mac aficionados anyway…get on the case apple…….oh crap, the first major issue that escapes many peoples attention!

Vested interest to fragment the market: 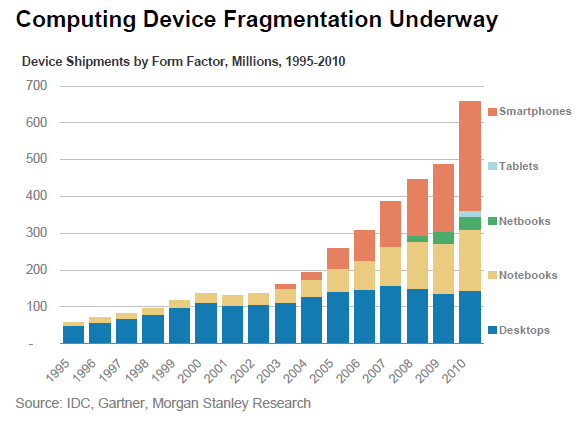 With Apple taking over the world bit by bit, do they actually want to stop people buying their own PC’s….it seems a fine balance of functionality over convenience is being played, we all know that it would be perfectly possible to cram in a huge processor into a tablet or smartphone and enough ram to make most hardcore desktops PC’s look like they came from the dark ages, like some kind of gigantic behemoths from the past….but price and positions dictate the market for both of these kind of devices and so they stay pretty powerful and reasonably cheap for mass appeal while the concept is new….but new is a dated word in about one week in technology.

But as with most new technology that seeks to replace old, (cars that run on electricity/battery) when industry sees massive potential, controlled measures make sure that they eek out as much of the consumers money as possible while in this state of flux.

So when will the general masses ditch the humble PC and upgrade to the Swiss army knife of new technology such as Smart Phones and Tablets?

It looks like this is happening already by quite a huge amount!

Maybe we need to think about this shift a little closer to answer that.

I personally do not see the death of the PC quite yet, it is more likely to become the hub of the home, with an ability to access the web from a set area of the home, (people like familiarity as much as convenience)

…but will most people actually need a new PC or will they look to buy mobile devices as opposed to an upgrade, when by and large they have got a perfectly powerful computer for now anyway.

Illustrations and statistics are showing that 2010 was perhaps one of the most recent highs for the desktop and I do not see this kind of sales growth returning for the foreseeable future.

Death Knoll for PC – About time:

So the shift is well under way as we can see.

Personally I love change, and having seen this shift happening for a long while, it is something I relish as I know there will be great opportunities and interesting applications that will arise from this natural and needed shift.

Sometimes it seems like things just have to happen, and I sense that the move to mobile technology is such an obvious step, we need to embrace it and start adapting to the potentials of freeing ourselves from a desktop or laptop and letting technology set us free not keeping us tied to a desk, its time to sit back, relax and get mobile I reckon.

Its your time now; what do you think of mobile devices?

Are you an avid user already or are you scared that they will take over your life, already spending way too much time on Facebook as it is!

Let us know you opinion, as always we love to hear more!