Quite how Cambodia has ended up with one of the most sophisticated mobile networks in the world is a bit of a mystery.

But even in the most remote of villages 3G connections are easy to access and 4G is on its way, couple this with being able to obtain a new Android smart phone for under $100 and you see that things are very different in South East Asia.

With 8 networks already in existence in Cambodia, users of mobile devices are spoilt for choice and with this competition comes aggressive pricing and as a result some very unique behaviour has emerged of native mobile users, dictated to by the operators.

Some offer there SIMS for free, others come with credit.

And in marketplaces such as Phnom Penh’s Old Market, sellers report that people buy multiple SIMS to take advantage of offers.

Phones which can work with up to three SIM cards are both very popular and very cheap.

With a population of around 14 million, the government boast that there are around 10 million connections, while the mobile network operators will readily admit that at least half of these are used by active users, as the trend is to move from deal to deal.

When walking down a main market street in Cambodia, the methods to entice buyers are nothing short of crude and in your face.

The most common method is to hire a booth with a DJ playing deafening music (some irony here it seems) to would be mobile users, a little touch of salesmanship via an MC and you have Cambodia’s guerilla marketing machine.

“With networks competing on price and service, customers are looking to upgrade – and take advantage of cheap 3G connections. Smart phones are being marketed heavily – and snapped up quickly.”

Beeline are a majority Russian owned mobile network, and with black and yellow branding are trying to create a “buzz” across Cambodia. 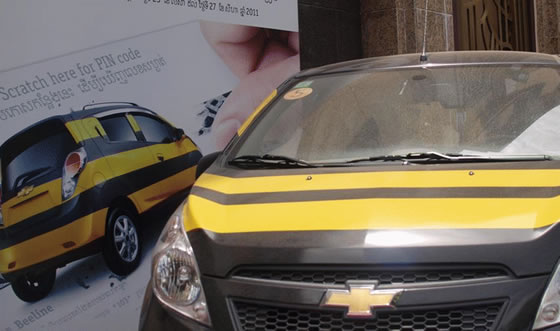 “The mobile penetration rate is still low and the Cambodian economy is developing very fast,” – “This is an interesting opportunity for investors.”

The coalface of mobile selling in Cambodia:

“The iPhone is our big seller,” says Butho, as he sits behind the counter of his Central Phone shop in Phnom Penh. “Nokia is going down and other smart phones are selling better, like HTC.”

Social Media is a growing phenomenon in South East Asia and Cambodia.

“They start by sharing things about their daily lives, like their wedding photos,” says Santel Phin, aka Khmer Bird a Cambodia blogger. “But more advanced users have started to talk about politics and the problems facing our society.”

So there you have it, the rise of the smart phone is well and truly Global, can you see the marketeers rub their legs in anticipation?